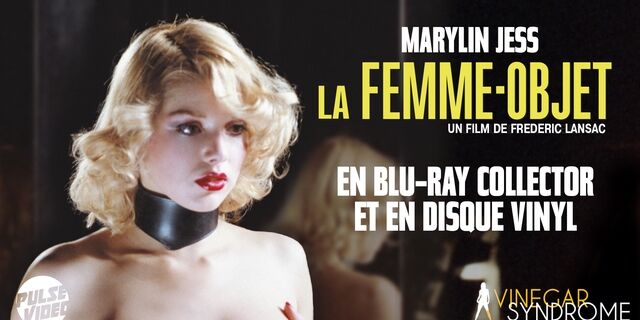 We previously released two original soundtracks on vinyl disc from vintage french porn musics called Brigitte Lahaie le disque de culte and Alain Goraguer, musique classée X, with stunning art work. So we couldn’t do otherwise with La Femme-Objet , and we are preparing a vinyl setting as spectacular as Marilyn Jess can be in the movie ! We are fully restoring the audio tracks from original material. Inside, in a gatefold, you’ll find a copy of a rare vintage Italian X-rated comics (translated in English) starring Marilyn Jess and la Cicciolina, so that you can get busy with your hands while listening to your LP.
Let’s talk about the film and the Blu-ray we are preparing now! Nicolas is a sci-fi writer who has a huge sexual activity that exhausts every of his women partners. With his technical skills and vivid imagination, he creates a sexual robot to fulfill his every desire. But soon, the android he controls with a remote controller starts to show her own desires.

The Music is composed by Jean-Claude Nachon who previously worked with Claude Mulot. It’s an eclectic electro-pop soundtrack with very 80s synthesiser and Rock and folk moods.

While we were working on this edition, we were contacted by the excellent US video editor Vinegar Syndrome, well known by English language cinephiles from around the World, to work with us on this release. So we are proud with this first team work between them and our very tiny French label Pulse Video. Our baby will be a multilingual one, with original french language track, but also English, Deutsch and Spanish languages, with English subtitles for both movie and documentary.
his is an almost one hour exclusive making-of documentary were we interviewed:

Director of Photography François About

With this making-of, you’ll find a short documentary about first restoration of the movie in 2002, with English subtitles.

We created an exclusive digipack Blu-ray cover for this crowdfunding and you can order your own special copy « kissed » for you (and for real) by Star Marilyn Jess. Our adorable Patinette (her nickname) is working with us to achieve the best release possible, as you can see!

We’ll let you choose between original French or English language cover if you buy the standard release of the movie.

Our previous books are available through this campaign, as well as the new book written by Christian Valor, Frédéric Lansac, cinéaste classé X, about Claude Mulot’s career as a X-rated films director, released by formidable french publisher Le Chat qui fume within its Nitrate collection.
Also available are our previous books Rayon X, about the crazy era of the X-Rated VHS (with its magical page 147) and our classic Brigitte Lahaie les films de culte.

One last thing : as for every campaign from our previous one, we happy to offer every backer our new set of Pulse Trading Cards, dedicated to La Femme-objet . Enjoy !

What are the funds for?

To finance all costs for rights, mastering, translation, subtitles, authoring, manufacturing and shipping for the Blu-ray, the LP and all the pledges that are offered in this campaign, as well as the shipping costs and taxes.

About the project owner