Just to clarify, we are not canceling or banning any titles in our catalog as a result of the Richard Stanley situation. We are merely consulting with the affected parties to determine the handling of future proceeds. 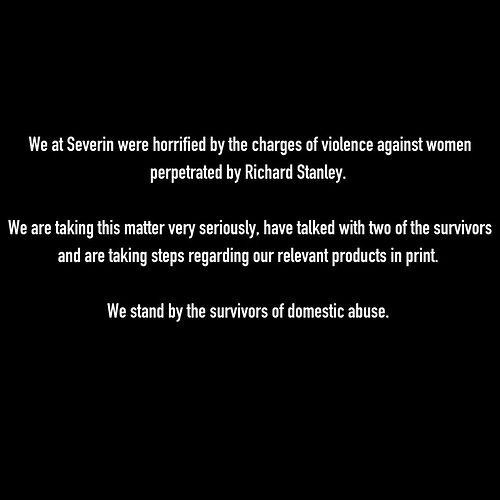 777 - FYI - Just a gentle reminder that I am not in jail, there is no evidence or case against me, nor have I committed any crimes. I remain alive and at liberty and am currently in a safe place, enjoying the early spring sunshine. The Zone looks after its own and truth will out - R x

777 - FYI - At home in the Zone - Spring is always my favourite season in the high valleys of French Occitania with the new green leaves on the trees, flowers and drifting seeds everywhere, the land washed clean by the spring rains and redolent with the promise of new life. Know that I am alive and well, making the most of the spring sunshine and drawing plans for the future. Contrary to the disinformation spread by my adversaries on social media, there is no case or evidence against me. Know that there are adults involved now and a full investigation is being carried out behind the scenes as criminal charges are prepared against my principal attackers. In the meantime, I wish to thank all those who have stood by me through this difficult period. It’s at times like this you get to find out who your true friends really are.
Keep the faith and know that truth will out - R x